Yesterday, 10/10/2017, Pridesys IT just reached to greater heights after they became the Champion in the Industry Application category of the BASIS National ICT Awards 2017. The awards were given based on different criteria and through four stages of screening. The first stage was participation application, which was followed by a written Q/A session. The third stage consisted of an online amplitude test and the final stage was a presentation directed towards the Jury board. 365 submissions were received in 17 categories, however only 181 applicants were able to make it to the final stage. PrideSys IT’s revolutionary Enterprise Resource Planning (ERP) software was among one of the 365 submission and its uniqueness and perfection enabled it to rise among all the others and became nominated for the final round and afterwards presented to 42 member jury board to bag the award. Mir Monuwar Iqbal, Md. Rafiqul Islam and Omar Faruk received the award from the Minister of State for Communications and Information Technology, Junaid Ahmed Palak.

Pridesys IT also congratulates the Runners-up and 2nd Runners-up for their tremendous effort in the BASIS National ICT Awards 2017. 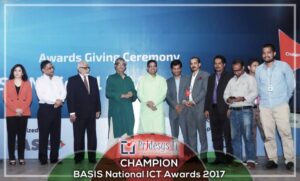 Pridesys is working to make a better postion for ERP service

‘Pridesys IT Ltd’ preeminent IT firm in BD: CEO Monuwar